My research is in computer security. My collaborators and I seek to answer basic questions about how to improve the status quo of keeping data and computations secure, while simultaneously providing insights and tools that help practitioners in the near term. Click on the links below to read brief descriptions of some example research projects or check out my full list of publications.

Description: We have been exploring committing authenticated encryption, which refers to schemes for which adversaries cannot find multiple secret keys that decrypt the same ciphertext. This proves important in applications like message franking, a cryptographic technique used by Facebook to enable securely reporting of abusive end-to-end encrypted messages. We have also explored new cryptographic constructions for enabling message franking in anonymous communications, and providing the ability to trace the source of a forwarded abusive message - all without sacrificing end-to-end encryption guarantees.

This line of work discovered subtle vulnerabilities in Facebook's message franking scheme (subsequently fixed due to a responsible disclosure process).

Description: Abusers are increasingly exploiting digital technologies in the course of intimate partner violence. In partnership with the New York City Mayor's Office to Combat Domestic Violence, we have conducted qualitative studies of the IPV ecosystem in NYC to help understand how technology arises in abuse situations. We also have explored the spyware as used in intimate partner violence, surfacing the wide variety of apps that can be used as spyware by abusers. Google has already made changes to their policies as a result of our work, and we are working with Google and Symantec on the tricky challenges that "dual-use" apps represent.

Our research team's webpage is here. Our research led to founding the Clinic to End Tech Abuse (CETA), which you can read about here.

Description: We have developed improvements to the usability and security of password-based authentication. Our hardening service Pythia renders stored password hashes uncrackable by offline brute-force attacks using a new cryptographic primitive called a partially oblivious pseudorandom function. More recently, we investigated typo-tolerant password authentication that will automatically correct, on behalf of the user, frequently made typographical errors. In collaboration with Dropbox, we showed that deploying typo-tolerance would help users log in without degrading security. We have explored the implications of password breaches in terms of improving targeted guessing attacks, as well as helped design privacy-preserving breach detection systems as dpeloyed by Cloudflare and Google. Our research helped motivate a change to Google's protocol, and ongoing collaborations with Cloudflare and the HIBP service.

Description: We have been investigating machine learning privacy and confidentiality issues. We performed a case study of privacy in pharmacogenetics, wherein doctors use machine learning models to help guide clinical assessments. We show that machine learning models can be abused by a clever attacker to infer genetic information about a person via a technique that we call model inversion. We show that previously suggested countermeasures based on the principle of differential privacy would prevent the attacks, but only while prohibitively increasing risk of negative patient outcomes. In follow-up work, we showed that model inversion works against facial recognition and lifestyle surveys because one can take advantage of real-valued confidence information released by machine learning prediction APIs 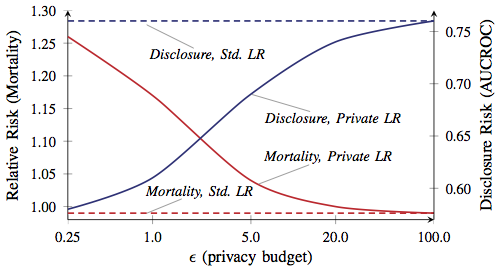 Description: We introduce honey encryption, a form of password-based encryption in which decrypting with incorrect passwords yields fake, but realistic-looking, plaintexts.

Practical impact: Our work is helping inform industry best practices. For example, we are referenced in the Cloud Security Alliance's cloud security guide and the European Network and Information Security Agency's report on cloud security. The CCS 2009 paper on new threats in public compute clouds is fortunate to be the second most-cited security paper of those published between 2008 and 2013. More recently, we have shown how side-channel attacks are possible on platform-as-a-service (PaaS) clouds, see our CCS 2014 paper.

Our CCS 2013 paper was runner up for the Award for Outstanding Research in Privacy Enhancing Technologies.

Practical impact: We introduce format-transforming encryption (FTE), and build particular encryption schemes whose ciphertexts are guaranteed to match against a regular expression of one's choosing. This proves useful in a variety of settings: we show in particular how it can be used to force protocol misclassification by the kinds of deep-packet inspection (DPI) systems used to detect and block censorship circumvention tools such as Tor. Check out the FTE webpage for source code and more details.

Papers:
Eurocrypt 2013, USENIX Security 2013
Description:
We introduce new encryption mechanisms for which ciphertexts can be usefully deduplicated by a storage service (without the keys). A prototype of our system, DupLESS, that can be used by organizations to perform encryption on client side but take advantage of cloud storage that is deduplicated, can be downloaded here.

Papers:
WOOT 2012, USENIX Security 2013
Practical impact:
We discovered (and helped fix) security vulnerabilities in a widely used smartphone-based point-of-sale system (used to process credit card transactions). See the vulnerability report here. In subsequent work, we built a tool Fie for analyzing embedded firmware to find such vulnerabilities and even verify their absence in some cases.